Cary, NC – If you can’t wait for Thanksgiving in November to have a big feast: good news. Canadian Thanksgiving is Monday, October 9, 2017 and you can even make a Canadian-style dish with an easy-to-make recipe.

Thanksgiving in Canada has historically been tied to the efforts in the 16th Century to chart a Northwest Passage around the top of Canada over to the West Coast of North America. In the midst of the icy and dangerous journey, religious celebrations to be thankful for their survival started and that became its own tradition.

This was later cemented into a more widely recognized feast and celebration, with records of Thanksgiving celebrations held in Canadian territory following the Seven Years’ War between Great Britain and France over territory in North America.

After World War I, Thanksgiving and Armistice Day were both made national holidays in Canada in November. They were first on the same day, but later separated and the dates moved around until the 1950s when Thanksgiving settled on the second Monday of October.

What do Canadians eat for Canadian Thanksgiving? Well, mostly what Americans do. There are definitely more Canadian kinds of food out there, from poutine to a triple O burger, but for a Thanksgiving meal, try a maple glazed turkey.

Ingredients for a 14 pound turkey:

Boil the syrup and cider together until it reduces down to half a cup. Once you have completed this step, remove it from the heat and mix in your lemon zest and half of your thyme and marjoram. Then add in the butter or margarine and whisk it down until it all melts down into a uniform sauce. Add salt and pepper as you see fit and then cover and refrigerate.

As your oven is preheating to 375 degrees Fahrenheit (or 190 degrees Celsius since this is Canadian), wash and dry your turkey and begin by applying half a cup of your maple sauce under the skin of the turkey breast and rub a quarter of a cup of your sauce on the outside of the entire turkey. Make sure to add your stuffing at this point if you are planning on having that.

If you are planning on arranging vegetables and giblets around your turkey, do so now and sprinkle the rest of your thyme and marjoram onto them. Also, add the rest of your chicken stock to the pan you’re cooking the turkey on.

Roast your turkey for 30 minutes, then reduce temperature to 350 degrees Fahrenheit (177 degrees Celsius). After reducing the temperature, cover the turkey in foil and baste the stock and other juices in the pan onto the turkey in intervals to keep it moist. If you didn’t stuff your turkey, this should last about three to four hours. If you did, five to six hours. To check and see if the turkey is done, penetrate the leg with a fork and see if clear or light pink juice comes out. That means it’s done.

And then, cut, serve and enjoy Thanksgiving the way our neighbors to the north do it. 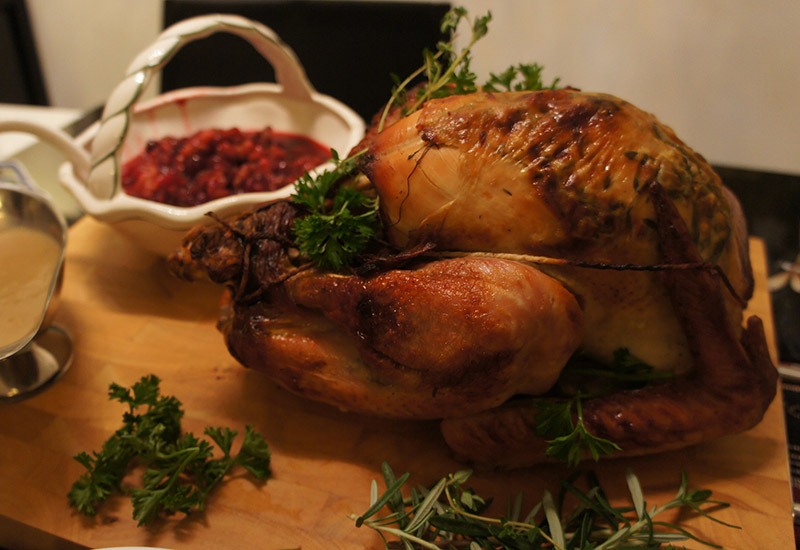