Cary, NC – Chocolate is a popular treat across the country but one Cary chocolatier has taken that interest to a new level, creating filled chocolates and winning several top awards from the Academy of Chocolate, including the International Rising Star Award. 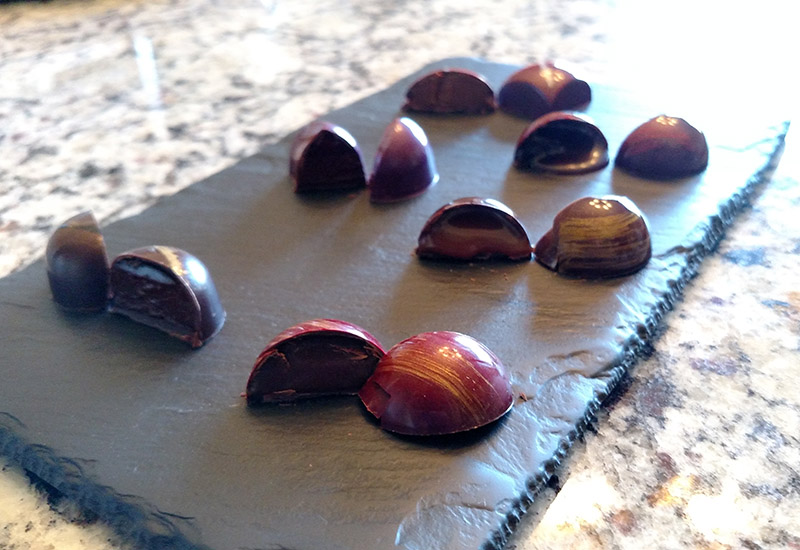 Grace Stocker started Chocolat Grace LLC in November 2016 and it has taken hold quickly, with six of her chocolates winning awards from the Academy of Chocolate in its 2017 awards ceremony.

“It was exciting but scary since this was my first competition,” Stocker said. “This year, there was a record number of entries so it raised the bar for competition.” 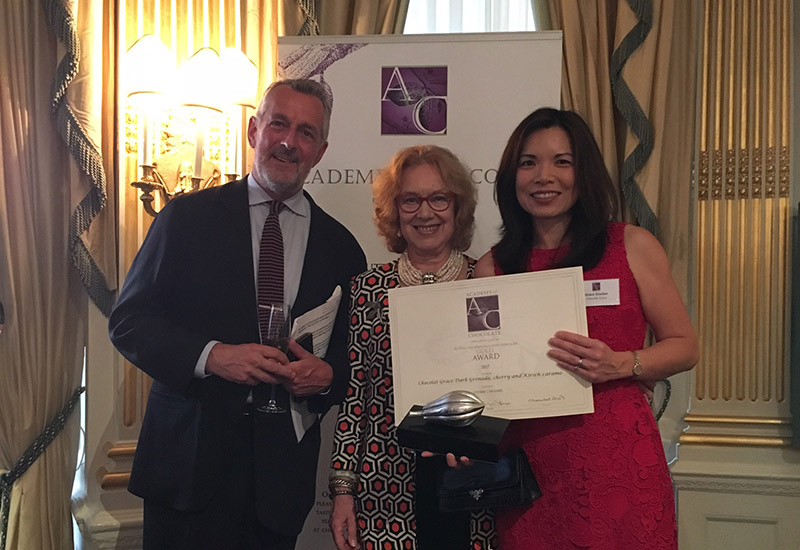 Grace Stocker, right, receiving her awards at the Academy of Chocolate’s ceremony in London with food critic Simon Parkes and Chief Executive of the Royal Academy of Culinary Arts Sara Jayne Stanes, OBE

In the “Filled Chocolates” category where Stocker competed, only nine gold-level awards were given out, three of which went to Stocker’s confections. Stocker also won two silver awards, one bronze and got a distinction with the International Rising Star Award.

“It’s a very special award. Getting a gold is so hard. Even big London shops don’t always do well in this competition,” Stocker said. “To get three golds is very rare. I was competing with the pioneers of British artisanal chocolate.” 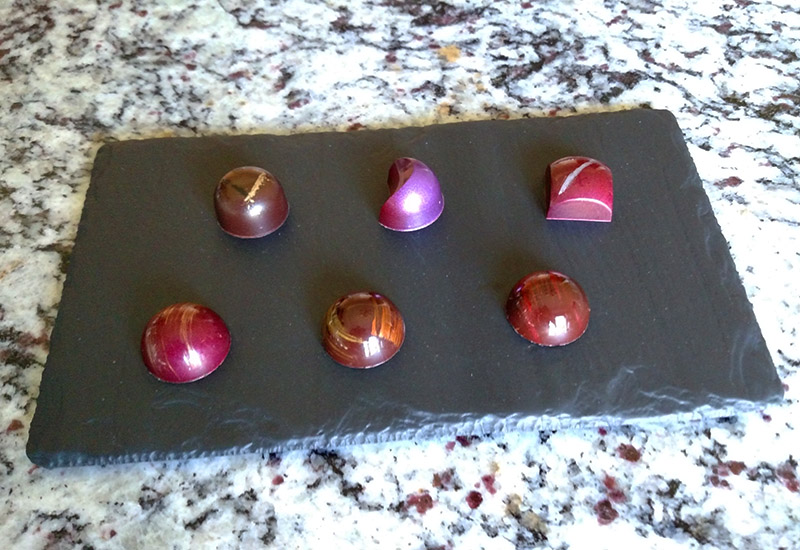 Currently, Stocker sells her chocolates through her website but is looking for retail locations where they can be sold and is exploring her options and locations for a potential store of her own some day.

“I’m still a mom so it takes time, but now is the time to start,” Stocker said. 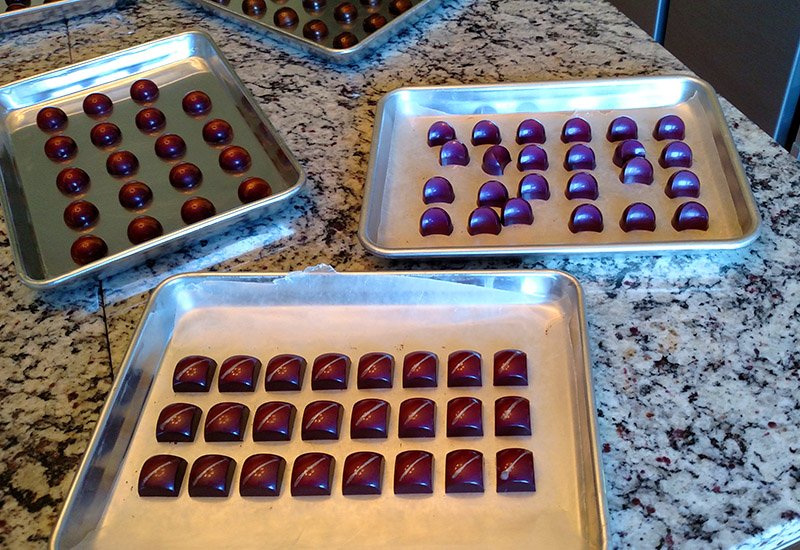 Training With the Best

Stocker was previously an engineer but transitioned into being a stay-at-home mother after her second child was born. Through this time, Stocker kept cooking and baking and working with pastry.

“I always found chocolate a challenge. It stirs me to work to learn more about it,” she said.

Stocker’s father-in-law is from Switzerland, famed for its chocolatiers, so Stocker knew where to go to study. She trained in Switzerland and France at the Condirama of Felchlin and L’Ecole du Grand Chocolat of Valrhona respectively.

“Chocolate is delicious but it has so many nuances and you can do a lot with it to bring out totally new flavors,” she said. “And it’s fun working with chocolate. There is a lot of chemistry involved and I like seeing people enjoy eating what I make.” 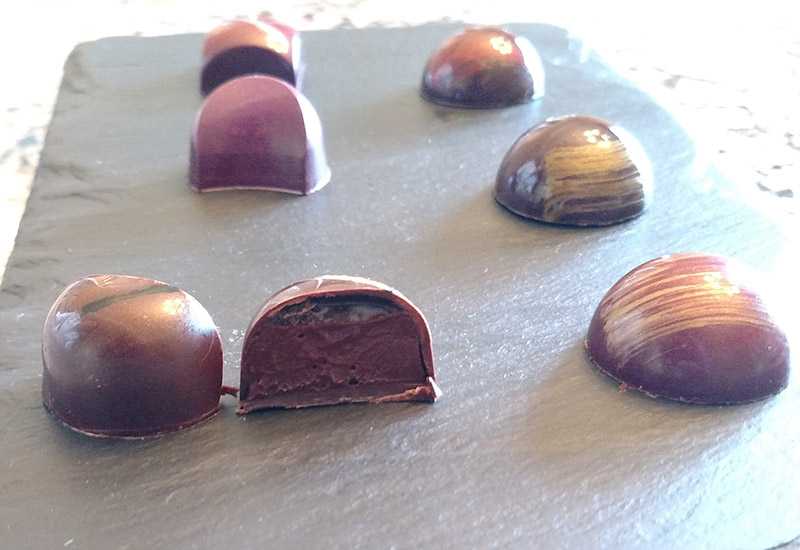 In her chocolate, Stocker used cacao maracaibo and said it was the best quality chocolate. For her three gold awards, Stocker created:

Stocker also has a plum-flavored chocolate with plum wine and ganache as well as a rum raisin chocolate made with an aged rum that both won a silver award. She also made a dark grenada with a filling made from local wildflower honey and Assam tea which won a bronze award. 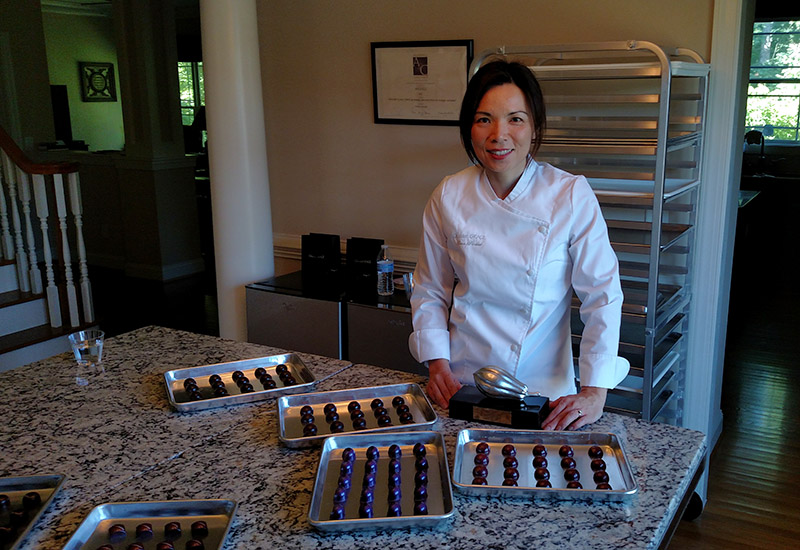 Lenny’s Expanding Into Cary As It Rebrands
Scroll to top