Cary, NC – With its distinctive big sign and proximity to some of Cary’s busiest intersections, the Butcher’s Market has been on the mind of local cooks for years as a place to get quality meats and local groceries. 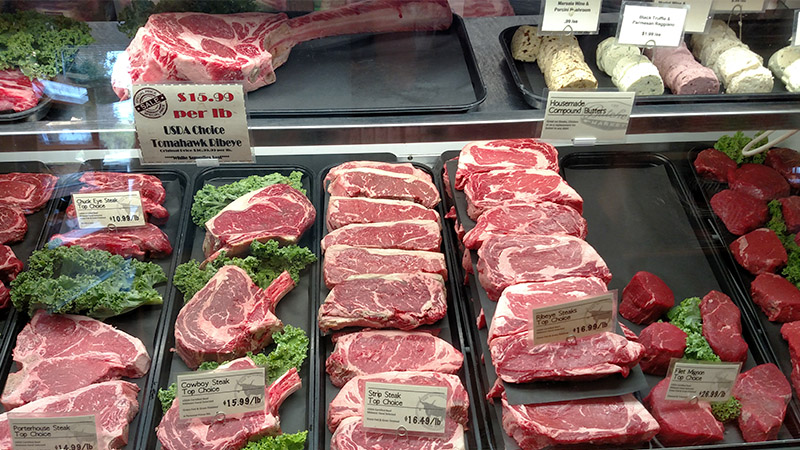 Meat For a Great Dinner

The Butcher’s Market on Kildaire Farm Road is a full service butcher where they work on the meat here in-store. The Butcher’s Market has been around since 1977, starting with owner Derek Wilkins’ father, and has been open at its current Cary location since 2010. It is a family business now, with Wilkins working with his wife and children.

In addition to handling meat, the Market also dry ages beef in house and cures and smokes 10 different kinds of bacon for sale with creative flavors such as “bourbon cider.” They also make sausage and cook side items for people to take home in the kitchen at their Raleigh location, such as pasta salad and baked potatoes. 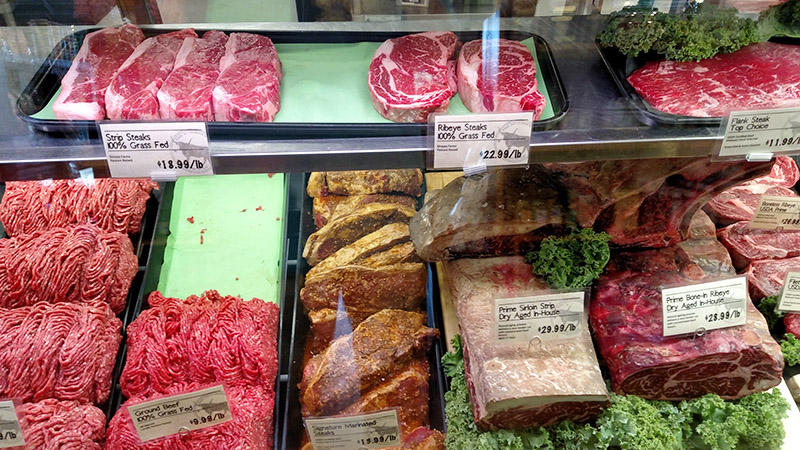 Going even further, Wilkins said the Market specializes in marinades and has many items such as beef tips in their special sauces.

“We’ve done a lot of prep work so it’s easy to come in and get what you need to make a meal,” Wilkins said.

Wilkins said the employees at the Market develop a relationship with customers, giving them advice about their meat and remembering their names when they return. To allow customers to do the same, employees have their names on the back of their hats.

“We can’t have name tags because we don’t want to risk them falling down into the counter but butchers have their backs turned a lot of the time so this way, customers can easily see their names,” Wilkins said.

In the Market’s glass counter, there are various kinds of meats, from fresh seafood to heritage-bred pork with the fat and flavor left in to grass-fed steak. 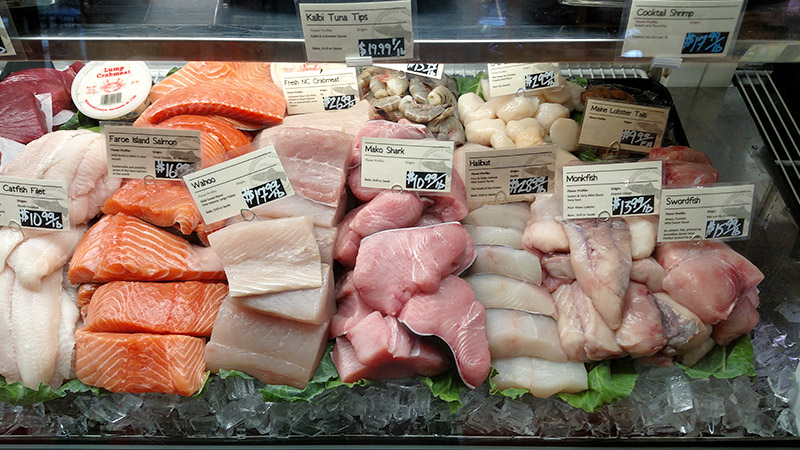 “If you look at other stores, their grass-fed steak is purple, there’s no marbling and it tastes bad,” Wilkins said. “Here, you can see how delicious it is just by looking at it.”

The Market also offers a “Steak of the Month” club for people to come in and get different special cuts of beef every month, with a large tomahawk ribeye for June.

The Butcher’s Market’s meats aren’t only prepared cuts of beef and pork. There is a deli with Boar’s Head meats as well as made-to-order sandwiches. 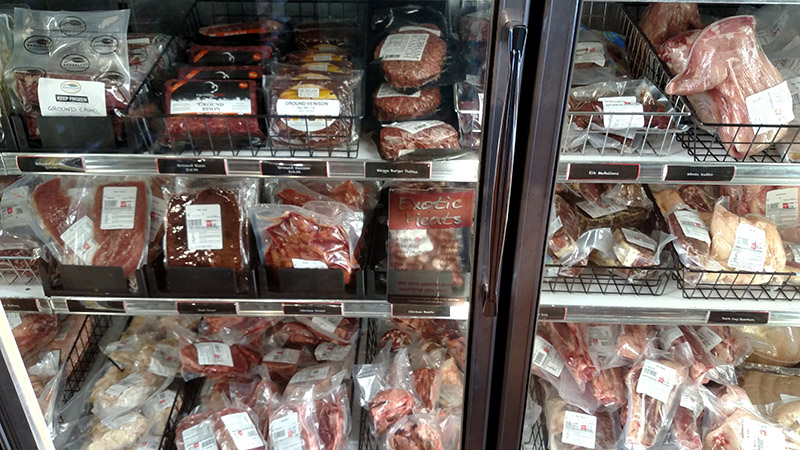 But what the Market also has that many other stores do not is their shelf marked “exotic meats.” Here, shoppers can find items such as poulet rouge, ossobuco and duck fat.

“There are all popular to cook with but they’re hard to find,” Wilkins said.

Next to these sit turkey bacon, elk, boar, all the way up to alligator meat, kangaroo meat and whole rabbits. And that isn’t even scratching the surface of all the kinds of proteins sold here.

The other side of the business at The Butcher’s Market is the grocery products from local businesses.

“We help a lot of local companies who start here before moving on to larger chains,” Wilkins said.

There are long lines of shelves with barbecue sauces by North Carolina masters, not to mention all of the North Carolina beer and wine that’s for sale, either in bottles, cans or growlers. 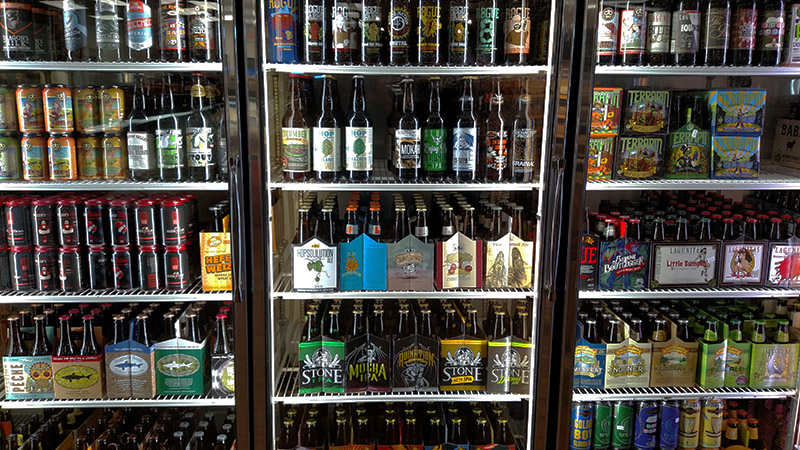 The local representation in food does not stop there. The Market carries bread from Stickboy in Fuquay-Varina, coffee from Larry’s Coffee in Raleigh and salsa from Yah’s in Huntersville. There is also cheese, milk, butter and yogurt from local cows.

The Market also carries large shakers of spices and rubs it puts together itself for the same price as much smaller shakers at typical grocery stores.

So if you are looking to put together a nice dinner with a tasty cut of pork or a cook-out with ostrich meat, check out The Butcher’s Market on 1225 Kildaire Farm Rd. 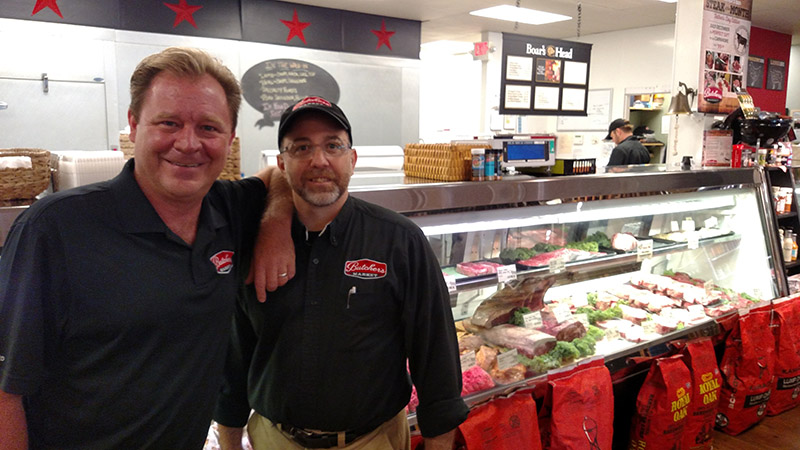