Cary, NC — I hadn’t heard of the King Cake, a Mardi Gras tradition in New Orelans, until about a month ago. Right away, though, I was intrigued, and who could blame me? A King Cake is sparkly and colorful and comes with a baby baked inside. As a curious person, I had to experience this for myself (and by that I mean bake one).

It turns out that, around this time of year, you can order King Cakes from local bakeries or even grocery stores. As someone who loves to bake, though, I wanted to make one myself. So I did, and about a week before Mardi Gras, too.

After all, it wouldn’t do my readers any good if I waited until Fat Tuesday, would it? 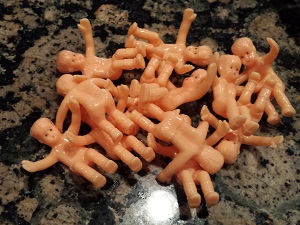 So, I baked the King Cake and brought it as “dessert” to a game night with friends last week. We enjoyed it with chicken sandwiches and mac n’ cheese.

If you’ve never made a King Cake before and want to try to make one, too, here are my personal observations – first off, if you use this recipe (which multiple sources confirmed was the “classic”), expect it to taste more like breakfast than dessert.

King Cake, despite its name, is actually made from dough – similar to a danish or pastry. Additionally, it can be very hard to find the baby that goes inside – I ended up using a tiny plastic baby that I found at Party City in the baby shower aisle. That brings me to observation number three – make sure you tell your friends to watch out for the baby!

They’re pretty small. Don’t let all this deter you, though –  King Cakes are fun, and my friends were delighted when I unveiled this sparkly, colorful cake. Though it tasted more like a cheese danish than it did a cake, it tasted good, and it was just plain weird when my friend Eric found the baby in his slice.

I couldn’t find one universal King Cake recipe – besides the fact that most were made from dough, the ingredients and icing were completely different in each version I found. I looked through dozens of recipes until I found this one – made with a cinnamon cream cheese filling, it sounded like the tastiest choice, and I wasn’t disappointed.

Just make sure you allow enough prep time – in this recipe, the dough has to rise twice and then cool (anywhere from 2-3.5 hours total). 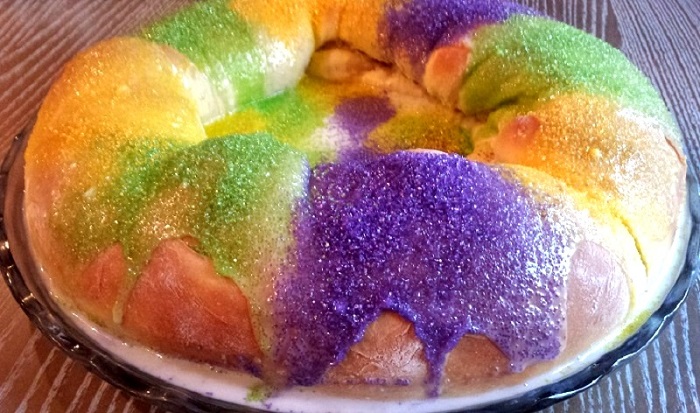 For the Filling and Garnish

Make the Dough & Let It Rise

First, you have to make the dough and let it rise. If you have a bread machine, like me, you can put the dough ingredients in the machine on the “dough” setting, and it will handle all the mixing, kneading and rising for you. 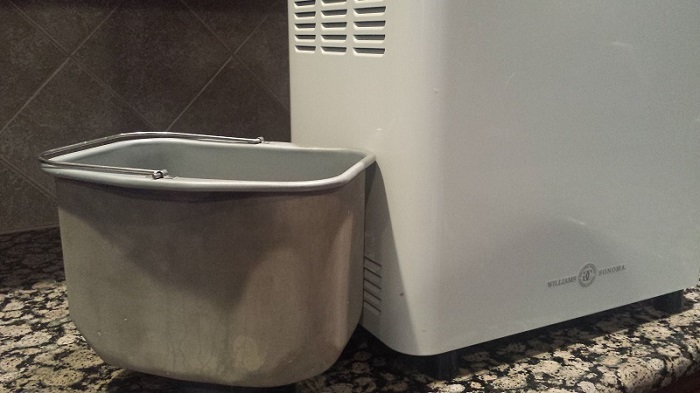 If you don’t have a bread machine, a mixer will work just fine. Here’s what you’ll do:

In the bowl of a standing mixer fitted with a hook, combine yeast, 1/2 tsp. of the sugar, and 1/4 cup of very hot water.

Stir to combine and let sit until foamy (about 10 minutes). 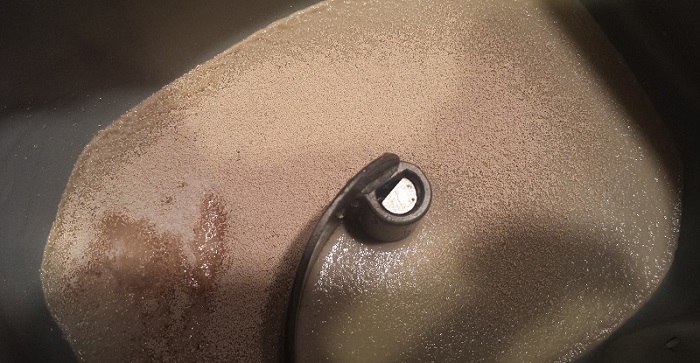 Regardless of if you use a bread machine or not, make sure the yeast has time to dissolve in the hot water before you add the other dough ingredients.

Beat on low speed until thoroughly combined (about one minute).

Turn mixer off and add flour and salt. Mix on medium speed until the dough just comes together. Turn mixer speed to high and knead dough for four minutes.

Add the butter and continue kneading until dough is smooth and pulls away from the side of the bowl (about six minutes).

Remove bowl from mixer, cover with plastic wrap, and let sit in warm place until doubled in size (one-two hours).

You can make the filling – the easy part – while your dough rises. Just combine the cream cheese, brown sugar, maple syrup, cinnamon, salt and zest in a large bowl with a whisk until well combined; set aside.

Then Make the Cake

Once your dough has risen the first time, you can construct the cake. 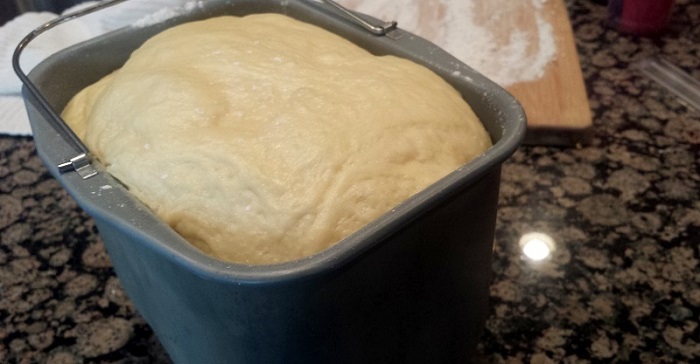 Punch down dough and turn it out onto a heavily floured surface. Using a floured rolling pin, roll the dough into a large circle, about 1/4” thick. Cut a hole in the center of the circle (I used the rim of a drinking glass) and pull with your fingers to widen. 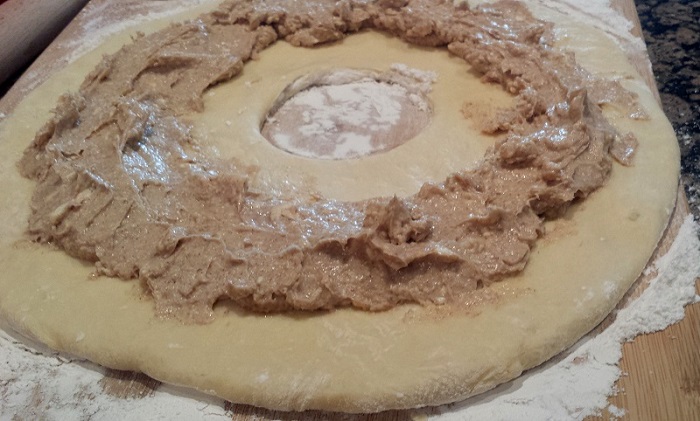 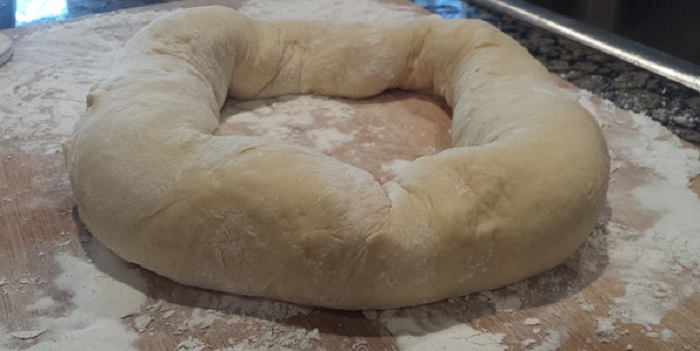 Drape outside edges over filling and continue rolling outside inward until filling is covered, widening inner hole as needed, until dough covers the seam.

Carefully transfer rolled dough circle with filling to a parchment paper-lined baking sheet (I had someone help me lift it so it didn’t break in half) and cover it with plastic wrap. Let it sit in a warm place for one hour.

Uncover cake and bake at 350 degrees until it’s golden brown, about 30 minutes.

While it cools, make a glazed icing of buttermilk and powdered sugar.

Once the cake has cooled completely, before transfer it to a serving platter.

Push one small baby doll into the cake (since this is a soft, doughy cake, it’s easy to insert).

Spread your glaze evenly over top of cake and sprinkle evenly with three colors of sanding sugars.

Okay, you’re probably wondering by now – what does the King Cake mean? 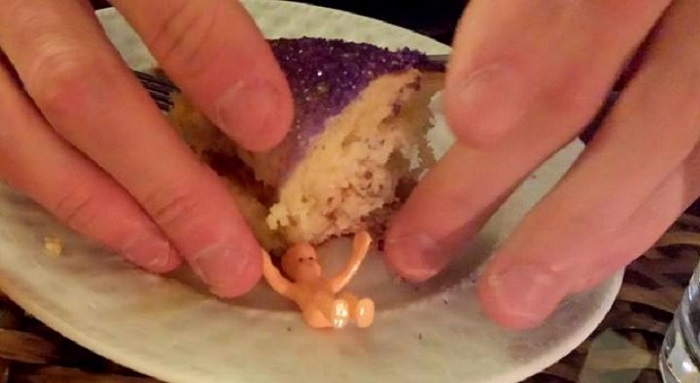 The King Cake, in a number of countries, is associated with the festival of Epiphany (which marks the coming of the wise men who brought gifts to the Christ Child) at the end of the Christmas season. In other places, like New Orelans, it is associated with the pre-Lenten celebrations of Mardi Gras. The baking of King Cakes is a tradition in New Orleans that begins on King’s Day, at the start of the Mardi Gras season.

King Cake is a popular dessert and snack in New Orleans during Mardi Gras, and hundreds of thousands of them are eaten during the carnival season.

The baby and the three colors all represent something. The baby represents baby Jesus, and it’s tradition that, whoever receives the baby in their piece of cake, must buy (or make) the next King Cake or throw the next party. The purple sugar represents justice, the green represents faith and the gold represents power.

Have you ever made a King Cake? Did you try this one? Comment below and let me know!