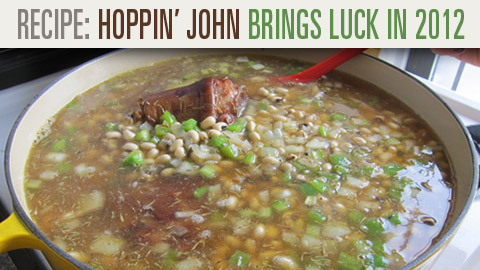 Cary, NC- I’m from the Northeast, so when I moved here more than a decade ago and attended a neighbor’s New year’s party, I didn’t quite understand the motive for a batch of beans cooking on the stove.

It’s a North Carolina tradition. Apparently those little black-eyed peas represent the money you will be bringing in by the bag-full in the New Year to come. Here’s some lore I learned:

The peas are symbolic of pennies or coins, and a coin is sometimes added to the pot or left under the dinner bowls.Collard greens, cooked along with this dish are supposed to add to the wealth since they are the color of money.Another traditional food, cornbread, can also be served to represent wealth — being the color of gold.

During the late Middle Ages, there was a tradition of eating beans on New Year’s Day for good luck in parts of France and Spain. The European tradition mixed with an African food item to become a New World tradition. So eating Hoppin’ John, means we’re cultured. I like that even more.

One tradition common in the Southern USA is that each person at the meal should leave three peas on their plate to assure that the New Year will be filled with Luck, Fortune and Romance. Another tradition holds that counting the number of peas in a serving predicts the amount of luck (or wealth) that the diner will have in the coming year.

Luckily I happen to like beans, just about every kind, so I will be raking in the dough after I make a batch of Hoppin John and eat a bowl this January 1. Join me!

Some people like to put bacon or a ham hock in with the beans when they cook. This actually bumps up your nutritional value, by increasing the protein in the beans.

Serve on top of cooked rice, and garnish with cheese. Add hot sauce if desired.

I’ll be counting my millions by next December for sure! Happy New Year everyone!

Kroger Building on NC 55 Sold for $4.1 Million
Scroll to top